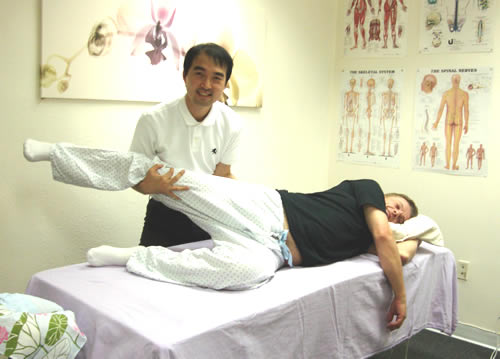 What is Manual Osteopathy?

This holistic approach to diagnosis and treatment originated in the United States in the late 19th century. Practitioners use touch and manipulation of the musculoskeletal system to restore or improve mobility and balance, and thereby enhance well-being. Techniques range from gentle massage to high-velocity mobilization of the joints. Now established alongside conventional medicine in North America, and practiced throughout Europe and Australasia, osteopathy is one of the most respected and widely used complementary therapies, particularly for pain in the back and joints.

Osteopathy, from the Greek osteon (bone) and pathos (disease), was developed by Dr. Andrew Taylor Still of Virginia, who was an army doctor in the Civil War. Prompted by the tragic deaths of his wife and three of his children from meningitis, in 1872 he devised osteopathy to stimulate the body’s self-healing powers.

In 1892 Dr. Still founded the American School of Osteopathy. Despite initial opposition from the conventional medical establishment, the therapy proved popular, receiving a major boost during the flu epidemic of 1919, when the mortality rate for patients in osteopathic hospitals was far below that in conventional hospitals. In 1917 one of Still’s pupils, Dr. John Martin Littlejohn, founded the British School of Osteopathy in London.

In the US, osteopaths have been licensed as conventional doctors since 1972. In the UK, osteopathy gained official recognition with the passing of the Osteopathy Act in 1993. Osteopathy is popular in many European countries, Australia, Canada, and Japan.

The organs of the body are supported and protected by the musculoskeletal system (see opposite). If this system of joints and muscles is correctly aligned and working well, the tissues of the body, including the brain and nerves, will be healthy, and the circulatory, lymphatic, and digestive systems will function properly. Osteopaths aim to improve the mobility of the joints and soft tissues using various manual techniques.

An osteopath will be as concerned about why there is a fault in the musculo­skeletal framework as with the physical problem itself, and will look for the reasons behind the problem. For this holistic approach, lifestyle and mental and emotional health are seen as important factors influencing physiological health.

There has been a considerable amount of research into osteopathy in the US, though not to a consistently high standard. Much evidence is anecdotal and most osteopaths accept that more clinically controlled trials need to be carried out. Research studies are under way in the UK, including Department of Health pilot projects to test the possibility of doctors referring National Health Service (NHS) patients to osteopaths and chiropractors. In 1994, the Clinical Standards Advisory Group recommended that manipulation should be available for NHS patients with acute back pain, and that doctors should work more closely with osteopaths, chiropractors, and physiotherapists.

Two studies, published in the US and UK in 1988 and 1990 respectively, showed that osteopathic manipulation could improve recovery time for lower back pain patients. During the 1940s, an American physiologist used electrical measurements to confirm osteopaths’ claims of increased activity in muscles.

With official recognition as doctors for over two decades, American osteopaths are part of the medical mainstream, and osteopathy is increasingly being integrated into the practice of medicine worldwide. Although perhaps a third of doctors in the UK refer patients to osteopaths, some are still reluctant to do so, especially when the patient’s problem is not musculoskeletal. The establishment of the UK General Council of Osteopaths in 1996 should build a basis for strong cooperation with the medical profession.

At the first consultation the practitioner will ask how your symptoms began and what activities make them worse. He will ask about your medical history, especially any past injuries, about any medication you are taking, including homeopathic and herbal remedies, and about your lifestyle, work, and emotional health.

Be prepared to undress to your under­wear, so that the practitioner can see as much of your body framework as possible. You may be offered a gown if you feel uncomfortable. In order to assess the way you hold yourself and how the joints are functioning, you may be asked to stand, sit, and lie down on a treatment table. The practitioner will probably examine your muscles for stresses and strains and will ask you to bend in various ways while feeling your spine. Standard medical tests are carried out, and arrangements are made for X rays or blood tests where necessary.

This assessment enables the practitioner to make a diagnosis, and decide whether osteopathy can help or whether you should be referred to another specialist.

Any osteopathic treatment will be tailored to your individual needs and adapted as treatment progresses. It may consist simply of soft tissue treatment, using cradling and light pressure, or it may involve vigorous manipulation of the joints, necessitating some rather unusual positions. Discomfort caused by muscle spasm can disappear after one session, but most patients need a course of treatment.

The main osteopathic procedures range from gentle manipulation of the joints, taking the limbs through their full range of movement, to an abrupt high-velocity thrust that, although painless, can cause the joint to “click” disconcertingly. Other techniques include positioning you so that tension from areas of strain or injury is spontaneously released, “muscle energy techniques,” in which you release muscle tension by working against resistance provided by the practitioner, and visceral manipulation, in which the practitioner uses touch and pressure to pinpoint and relieve problems in the internal organs. The practitioner may recommend exercises and relaxation techniques to follow at home or work.

Lower (or lumbar) back pain is a common problem, and one for which osteopathy is often used. Sitting habitually in a slouched position, lifting heavy objects incorrectly, and sports or other injuries all frequently cause lower back pain. The practitioner examines the spine to identify areas of stiffness. He uses soft tissue treatment to relax the area and then may perform precise manipulations, which may be accompanied by a “click” as joints are restored to their full range of movement.

Sprains, stiffness, and injuries such as whiplash or the locking of a vertebra in the neck can be treated with osteopathic manipulation, shown here, or by soft tissue treatment. This uses light massage and rhythmic stretching techniques designed to improve joint mobility by decreasing muscle tension and improving blood supply to the tissue.

An American osteopath, Dr. William Garner Sutherland, developed cranial osteopathy in the 1930s. At that time, it was believed that the bones of the cranium (the part of the skull around the brain) fused by adulthood and could not be adjusted. According to Dr. Sutherland, however, these bones, which are separate in babies and young children, do retain flexibility. He also believed that the cerebrospinal fluid, which nourishes and protects the membranes encasing the brain, spinal cord, and sacrum, pulses at a rate of about 6-15 times per minute. This cranial rhythmic impulse (CR1) is difficult to measure with equipment, but practitioners claim to be able to sense it by touch.

Disturbances in the flow of fluid are said to reflect pressures on the cranial bones or injuries and tension in the body, which can be eased by delicate manipulation of the cranial and spinal bones to restore the CR1 and boost blood circulation and drainage of lymph and sinus fluids in the head.   Cranial osteopathy may be used for the same conditions as osteopathy, and can be combined with other osteopathic methods. It seems particularly successful on young children with colic, middle ear effusion (glue ear), and recurrent infections, and is often used on babies to correct distortions in the cranial bones caused during birth. If these are not eased back into place, or are knocked slightly out of position later in life, it may lead to physical problems.

Other variations focus less on the bones than on other parts of the cranial system. The reflex approach aims to relieve stress patterns in the body by stimulating nerve endings in the scalp and between the cranial bones. The sacro-occipital technique, preferred by chiropractors, combines elements of cranial osteopathy with craniosacral techniques.